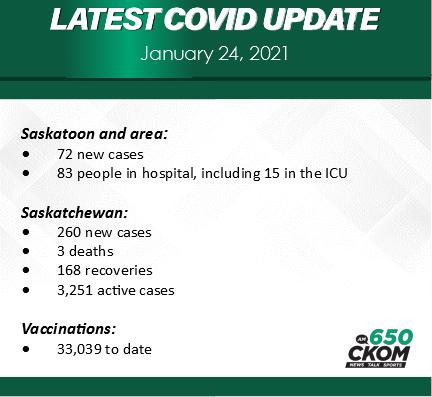 Saskatchewan is out of COVID vaccines for now.

There were 642 doses delivered Saturday, bringing the total to 33,039.

With that, 101 per cent of the doses delivered to the province have been administered. The extra one per cent comes thanks to Pfizer overfilling vials of the vaccine.

In that same news release, the Ministry of Health reported that three more people have died with the virus.

The location has been discovered for eight cases that were previously under investigation. They have been assigned to the northwest (four), north-central (three) and far northwest (one) zones.

There are 196 people in hospital and of those, 32 are in the ICU in the Saskatoon (15), Regina (nine), north-central (four), northwest (two), central-east (one) and south-central (one) areas.

There were 2,694 tests processed in the province Saturday, which raises that total so far to 490,939.